Located in Northern New Jersey, Summit is home to over 22,000 residents. With a small-town feel, Summit is extremely family-oriented and is known for its highly ranked public school systems. Summit's gorgeous neighborhoods are intertwined with delicious restaurants and unique amenities, like Watchung Reservation. Additionally, the town's ideal location attracts residents to settle down there, with only a 50 minute train ride into NYC and an hour drive from the Jersey Shore.

Why People Choose Summit to Live

With its ideal location, exceptional school district, and unique amenities, it is no surprise that people rave about living in Summit. The town attracts many families with parents who commute into the city because of its close proximity to Manhattan. Commuters can easily hop on a train or bus to ride into NYC from Summit's downtown area. Although Union County is known for its towns' school districts, Summit's public school system was ranked top in the county and 4th overall in New Jersey by NJ Patch. This contributes to Summit's family-oriented atmosphere, which draws in residents looking for the perfect place to raise a family. 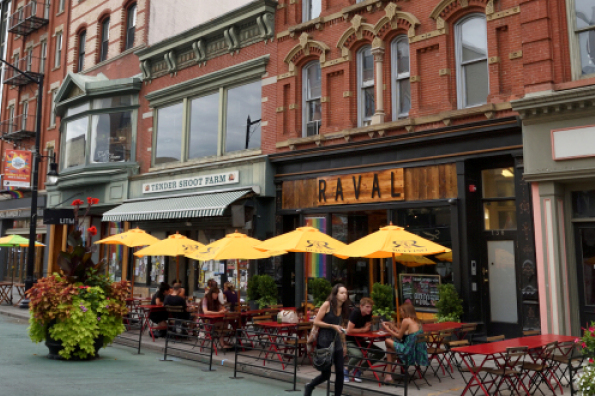 Summit is home to an actress who is known as "the best actress of her generation": Meryl Streep. Streep was born in Summit, grew up nearby in Basking Ridge, NJ, and eventually moved to Bernardsville, NJ. Throughout high school, Streep starred in theatrical plays and discovered her passion for acting. After graduating from Yale University with a Master of Fine Arts, she landed her first professional acting role and the rest is history. Streep is now a record-holder for Academy Awards, a several time Golden Globe winner, and an Oscar nominee. Despite her tremendous accomplishments and fame, Meryl Streep's roots are in Summit and she will always be a New Jersey girl at heart.

Northern New Jersey is also home to several other famous people. Anne Hathaway grew up in Summit's bordering neighbor, Milburn, NJ. About 25 minutes away from Summit is Newark, NJ, home to Queen Latifah. A little farther up in the state is Englewood, NJ, which is where John Travolta was born and raised. Northern New Jersey may not be Hollywood or Beverly Hills, but it is home to several celebrities.

In addition to its famous former resident, Summit is also known for its delicious food spots and breathtaking outdoor amenities. Its downtown area explodes with a variety of diverse restaurants. Some of Summit's highly ranked restaurants include Winberie's Restaurant & Bar and the Committed Pig, which are both known for their phenomenal burgers. If you are looking for authentic Italian food, La Focaccia and Fiorino are Summit's top rated spots. Summit Greek Grill and Sushi Palace are two of Summit residents' favorites. No matter what type of cuisine or ambiance you are craving, Summit is the town to dine in.

As for Summit's outdoor amenities, the town is home to Watchung Reservation. This gorgeous nature reserve spreads across Summit, Berkeley Heights, Scotch Plains, and Springfield. With several trails that go on for over 10 miles and Lake Surprise, Watchung Reservation attracts visitors from all over New Jersey. The reserve is also home to horseback riding at Watchung Stables and summer camps and school trips at Trailside Nature & Science Center, which contribute to Summit's family-oriented aspect. Overall, Summit offers several amenities that makes the New Jersey town noteworthy.

With its close proximity to NYC yet small-town feel, Summit is definitely a unique town in New Jersey. Its highly-ranked school district, top-notch restaurants, gorgeous features like Watchung Reservation, and even claim-to-fame from Meryl Streep make Summit the one-of-a-kind town that it is today.